Every Girl Needs a Fantasy…

…And it would be hard to find a better one than (drum roll)…HUGH JACKMAN! 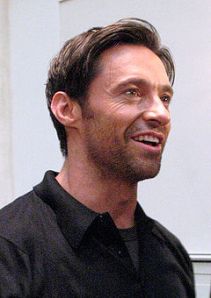 I thought”Australia” was not the greatest movie I ever saw (although it could have been), but being fascinated by Australia, I liked it.  …  And I could watch it once a week just to see Hugh Jackman as Drover.

One night this past week, I got home just in time to catch the hunky Hugh  on Leno’s show.  What a cool guy! Tall, good-looking charming, funny, talented and many other things that appeal to me. Compared to many Hollywood types, he comes across as being down-to-earth and easygoing. I couldn’t be a fan if I thought he was otherwise.

The first movie I can recall seeing him in was the romantic comedy, “Someone Like You,” with Ashley Judd. I didn’t know his name at that time, but he caught my eye immediately and I’ve been a fan ever since. I liked that movie enough to go out and hunt down the book it was adapted from. That movie is one instance where I think the movie turned out better than the book. I don’t mean to imply that the book, which is a chick-lit story, is bad; I just liked the movie better.

On Leno’s show, Hugh talked about his new movie, “Real Steele” and his one-man Broadway show. He performed a short skit of the railroad song from “Music Man,” at which he was very good. Need I say I would love to see this show.

In my imagination, Hugh Jackman a character right out of a romance novel. In fact he IS the character I sort of loosely based the hero’s appearance on in my upcoming February release from Entangled Publishing. I have to have an image in my mind when I write about the hero, so my book hero, Drake Lockhart, in “TEXAS TYCOON,” looks like Hugh Jackman. Hugh’s a little older than Drake, but that’s okay.

I have to say that every hero in every book I’ve written (except the Dixie Cash books) is some version of Hugh. The picture to the right is Hugh all right, but it’s also Dalton Parker in “SWEET RETURN.” 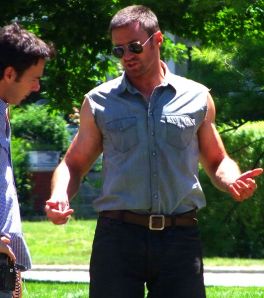 I guess the way he looks and behaves just appears both “alpha” and “heroic” to me. As any of you who have read my books knows, my heroes are always alphas. I also like Clive Owen and David Craig as “alpha heroes.”

An editor told me once that all romance novels are fantasies, no matter if they’re contemporaries, historicals, paranaormals, etc., which is why they’re so popular. We all have to latch on to a little escapism to keep us sane, especially these days. So I guess if we’re fantasizing, we can certainly fantasize about Hugh Jackman. In the name of therapy, of course.

And it just dawned on me as I write this, where are the American men? Why are all of the alpha “heroic” types from outside the country? There hasn’t been a good American alpha hero in the movies since Tom Selleck got old. If you can think of one, let me know.

Photo of Hugh Jackman from Creative Commons via Wikipedia

Filed under Books and Movies, Writing